The Chief Executive Officer of the Association of Ghana Industries (AGI), Mr Seth Twum-Akwaboah, has welcomed the Power Ministry’s announcement of an end to the country’s load shedding regime with some scepticism.

According to him, the holiday break by most industries in the country has made available power, which would have been used by companies.

“We always take some of these things with a bit of caution because, at this particular moment, industries are not in operation and, therefore, most of the power that they consume is being added to homes, so that makes it look good, but let us wait for next year and see how it goes,” he explained in an interview with Joy FM.

“There was a challenge with purchase of power, so, if today we managed to buy enough crude oil and, therefore, the thermal plants are working, three months down the line what will the situation be like?” he queried.

The CEO believes the situation should be monitored for a period of time before concluding that the energy crisis is over.

“…It is welcome news but we will take it with caution.”

The Government of Ghana officially announced an end to the load shedding on Wednesday, December 30, 2015.

A statement from the Power Ministry signed by Kweku Sesah Johnson said: “The Ministry of Power wishes to inform the public that its load-shedding programme, in respect of electricity supply, has been brought to an end.”

“The Ministry takes this opportunity to express its profound gratitude and appreciation to the entire citizenry and residents of Ghana for their forbearance and understanding during those difficult times. The Ministry and its agencies wish to assure the public that they shall continue to pursue policies and programmes to consolidate the gains so far made in generation and transmission of electricity for the country,” the statement added.

The country experienced a load shedding regime for over three years, which led to the collapse of some businesses, with many workers losing their jobs. 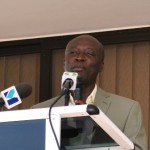