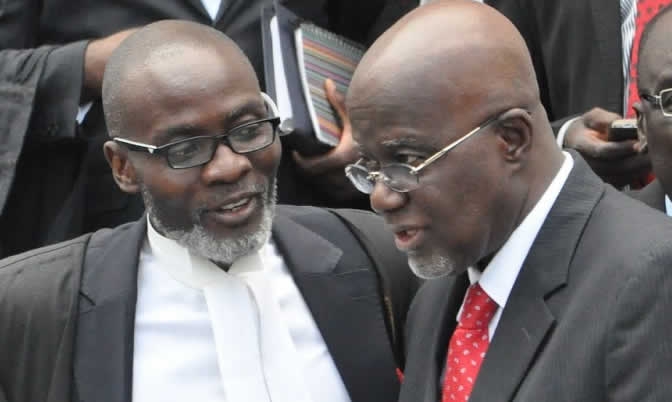 A National Executive Committee member of the New Patriotic Party, Hackman Owusu-Agyemang has condemned the court action against the party over its decision to suspend its Chairman, Paul Afoko.

If succeeded, he said, the action by three members of the party would cripple the party’s machinery, particularly at this crucial hour that it is preparing to go into the 2016 polls

Three stalwarts of Mr. Afoko have gone to court to restrain Mr. Freddie Blay from holding himself out as the acting chair of the party and to convene and attend meetings “without the purportedly suspended Chairman being the convenor of the meetings.

They are further seeking to “…restrain the defendants [29 party officials and the party itself] from taking decisions in any meeting not convened by Chairman Afoko, until this dispute is finally determined.

But Mr. Owusu-Agyemanghas noted the consequences of stopping the Steering Committee, the National Executive Committee and the National Council of elders from meeting could be dire for the party which has been rocked with internal bickering and power play.

“Can you really understand that a political party will stop its steering committee, which is charged with the day to day running of the party as per the constitution from meeting? Then the NEC will not meet, and the National Council will also not meet? What are you trying to do, kill the party or something?” he said on TV3’s News @ 10 Tuesday night.

Mr. Hackman said it was crucial that the court in deciding the matter consider the wider interest of the party as against the three plaintiffs in the case, who he said, should have exhausted the party’s internal processes before the court action.

“…Any judge, looking at the situation, will have to look at the wider interest of those members of the party as opposed the three individuals. You cannot immobilise a whole political party. I think there are issues within the party and there are modalities to resolving them,” he stated.

According to him, the NEC of the party acted within the constitution of the party in its meeting last Friday at which a unanimous vote was taken to suspend Mr. Afoko who the party has accused of being at the centre of the division in the party.

“There can be no argument about illegalities in the way things have gone so far. There was a resolution; there was the report of the committee as well as a letter… The chairman cannot sit in a meeting where he was the subject matter,” he said.

Commenting on the issue of who has the mandate to convene a NEC meeting, Mr. Owusu Agyemang revealed Mr. Afoko could not be reached to do so and considering the urgency of the situation, the first Vice Chairman, Freddie Blay was authorised to do so.

He said: “Our clear understanding was that they could not reach the chairman and in view of the urgency, the Vice Chairman proceeded as he has been so authorised to do.”

Meanwhile, he has described as laughable the, the decision by the plaintiffs in the case that they are ready for an out of court settlement of the issue, saying “this is laughable, if they wanted us to settle out of court why didn’t they come to the party first, why do you go to court first, so that you have a debacle hanging over your head?”

Mr. Owusu Agyemang said they should have come to the party first instead of the court action they have started, noting, “We don’t talk under duress… that is not the way to go.”

Speaking on to Bright Nana Amfoh earlier on in the News, lawyer for the plaintiffs, Martin Kpebu said his clients want the court to declare the NEC meeting of last Friday as well as the decision taken to suspend Mr. Afoko null and void as it contravenes the party’s constitution.

He said they are further seeking an injunction to restrain the NEC and other high-profile party members from further meeting on the matter until the final determination of the substantive case.

Again, he said his clients have instructed him to commence contempt proceedings against NEC and the party for going ahead with its meeting on Tuesday when it had been served with an injunction processes.

He said his clients would welcome any attempt by the party to meet with them to settle the matter out of court, noting,“the party should not have even gone ahead to suspend Mr. Afoko…It was ill-timed and has caused heightened security in the country”.

“If the party in its wisdom thinks that we should cease-fire and have a political settlement to this, my clients are ready. That will be better; it will be better in the interest of their party.

They [NPP] are subjecting their own party to ridicule… showing that they are not even prepared… if they really want the interest of their party, call us and say let’s settle this, and say we will reverse the decision of NEC and have Mr. Afoko back in office and there will be peace,” he said.

Meanwhile, a senior political scientist at the University of Ghana, Dr. Evans Aggrey-Darko says the recent happenings in the party demonstrates lack of unity of purpose, saying they “continue to behave as though they don’t have any major focus”

He said considering that its not easy in Africa for an opposition party to defeat an incumbent president, he was surprised that the NPP is “in self-destruction” mode engaging “in all kinds of what I will call anomic behaviour which will not yield any positive dividend for the party and those who support the party and of course those who preach multi-party democracy.”

He said it was unfortunate that the party has failed to convince its rank and file of the significance of its decision suspending Mr. Afoko, indicating that has caused a section of the group to go haywire.