The suspended National Chairman of the New Patriotic Party (NPP), Mr Paul Awentami Afoko, has wished members of the NPP and Ghanaians in general a Merry Christmas and a Prosperous New Year in advance and prayed for God’s blessings for everyone.

He has also called on Ghanaians, especially the entire membership of the NPP, not to lose hope.

In line with this, he urged members of the party and Ghanaians to use the Yuletide to do a self-introspection with the view to reforming ‘’our conduct for the good of the party and country.”

In a Christmas and New Year goodwill statement, Mr Afoko expressed his gratitude to Ghanaians, especially NPP?members, who had had to endure pain and disappointment at what was happening within the NPP.

He said the last few months of the year had seen the NPP in very difficult times but “genuine peace and unity will be the result of justice and respect for the NPP Constitution”.

‘’Nevertheless, now that Christmas is with us once again, I wish to entreat members of our party to endeavour always to cherish democratic principles of rule of law, respect for each other’s opinion, love, unity, truthfulness and the abhorrence of corrupt practices, which the party prides itself on ,’’ he said.

Sadly, Mr Afoko noted, in the last five months or so, these beautiful principles which have held the party together and attracted many to its fold had not been adhered to but had been replaced by the unattractive principles of nepotism, intimidation, intra-party culture of silence, encouragement of corrupt practices and egregious breaches of the party’s constitution, which has left genuine party members in despair.

He said dissenting and opposing views of issues within a political party did not necessarily mean that persons with such opinions lacked loyalty to their party. “This new behaviour of our party does not resonate with our party members and is also driving potential members and sympathisers away,” he added.

“The great Dr K. A. Busia of blessed memory reminded us that, ‘The real test of a democracy is not just the right of a minority to disagree, but the right of an individual to disagree with the majority and still feel secure,’ ” he stated.

Mr Afoko gave an assurance that the root of these injustices and other negative practices within the party were being tackled at the appropriate forum and said it was his expectation that the law courts would help restore sanity to the manner in which the NPP conducts its affairs. 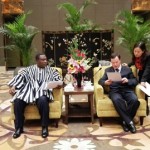