A case brought by a member of the New Patriotic Party challenging the legality of the processes leading to the suspension of the party’s chairman has been dismissed.

Oppong Kyekyeku had argued that the Disciplinary Committee of the NPP lacked jurisdiction to hear a petition calling for the suspension of the party Chairman, Paul Afoko.

In his view, any petition requesting sanctions on the National Chairman ought to have been directed at the National Council, the highest decision-making body of the party outside conference.

Submitting petitions, therefore, to the disciplinary committee, he argued, was an error and a violation of the NPP’s constitution.

But his case has been thrown out.

The court said Mr. Oppong Kyekyeku did not prove his interest in the matter and also didn’t show in court that he was an agent of the suspended National Chairman of the NPP.

It further held that the applicant failed to exhaust internal mechanisms laid down in the NPP’s constitution for dealing with disputes and addressing grievances.

Does this decision signal doom for a similar case brought by three others seeking a declaration that Mr. Afoko’s suspension is unlawful and, therefore, null and void?

Lawyer for the three, Mr. Martin Kpebu, who is also lawyer for Afoko, says it does not.

He told Myjoyonline.com he was in court when the ruling on Oppong Kyekyeku’s case was given and he respectfully disagrees with the reasoning of the court in dismissing the case.

He said he will be citing decided cases to make the point that one does not necessarily need to have vested interest in a case to bring a suit.

The NEC of the NPP on October 23, 2015 endorsed a recommendation of the party’s disciplinary committee, suspending the National Chairman indefinitely, and appointing 1st Vice-Chairman, Fredie Blay, as acting National Chairman.

This was based on petitions filed by two elders of the party – Alhaji Sulemana Yirimea and Alhaji Aminu – who accused Mr. Afoko not working in the interest of the party since his election in April 2014.

Mr. Afoko and his lawyers faulted the decision as unlawful and threatened to head to court.

But instead, some three individuals brought a case in the High Court to challenge NEC’s decision. They also want the party restrained from holding Mr. Blay as acting Chairman.

The party has largely ignored the case and were cited for contempt last week for holding a Steering Committee meeting regardless of the case.

The party’s NEC and National Council further ignored this case and held a series of meetings Tuesday, November 3, 2015.

All these cases were preceded by Oppong Kyekyeku’s case which the High Court dismissed Wednesday morning, November 4, 2015.

Lawyers for the NPP, led by Godfred Dame, challenged the applicant’s capacity to sue.

Tapha Tassah, lawyer Oppong Kyekyeku, counter-argued that the NPP as a political party, is a public institution and any member concerned about happenings in the party can bring an action in court.

He said his client did not resort to the internal mechanisms because he didn’t think he would get justice.

This argument did not find favour with the judge who dismissed the case, saying it was premature.

Mr. Tassah said they will study the ruling in detail and determine whether or not to appeal.

For now Mr. Afoko appears to have his back against the wall in his attempt to fight his suspension in court. 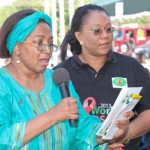