Beleaguered National Chairman of the New Patriotic Party (NPP), Paul Afoko, has refused to honour an invitation by the Disciplinary Committee of the party.
Mr Afoko had been invited by the Committee which is chaired by Reverend Samuel Asante-Antwi, to respond to charges leveled against him by the NPP’s Council of Elders.

Some of the charges are constitutional breaches, trading internal party affairs in the media contrary to laid-down procedures and authorizing the police to probe the party on an allegation of some executives opening an account in the name of the party without the knowledge of the National Chairman (Afoko) and the General Secretary, Kwabena Agyepong.

In a letter dated September 7, 2015 signed by the Chairman of the party’s Council of Elders, C.K. Tedam, and addressed to the Disciplinary Committee, he among other things, demanded that at least, Chairman Afoko should be suspended from his office until after the 2016 elections.

They are also seeking “appropriate recommendation to promote discipline, peace, order, harmony and progress in the party towards elections 2016.”

But when the time came for Mr. Afoko to be heard, he failed to show up.

The meeting was scheduled to take place at the Alisa hotel, North Ridge in Accra.

As early as 10am, members of the Disciplinary Committee had arrived at the venue waiting for Mr. Afoko for the process to start.

Two other members, William Ofori Boafo, who represents the party’s parliamentary caucus on the Committee and Alhaji Abdul Rahman Short, representing the party’s regional chairmen, were absent because they are outside the country for different engagements.

But after waiting for Mr Afoko for some four hours in vain, members of the Committee had no other option than to leave with signs of disappointment all over their faces.

What seemed to baffle them was the fact that the NPP National Chairman failed to even call to offer an explanation as to why he could not make it to the meeting.

The committee said it would give him another opportunity next week Tuesday.

A source told Daily Guide later that Mr Afoko claimed that he turned down the invitation because he was not properly served. 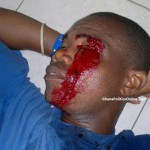