Editor-in-Chief of the New Crusading Guide says suspended NPP Chairman Paul Afoko must accept the suspension by the party to get his moral authority.

“You are a Chairman and in this case a suspended chairman. Look I insist, you must subject yourself to the regime of discipline required by the party’s constitution that is how you get your moral authority,” Baako said on Joy FM’s news analysis programme, Newsfile.

Baako’s comments are in reaction to the killing of a New Patriotic Party member in Asawase in the Ashanti Region. Abubakar Saddiq was butchered of Friday in what is believed to be politcally motivated.

According to him “even if in the most unlikly situation, Paul Afoko wins legal battles for reinstatement or if he is reinstated by internal party structures, his moral political autority to lead NPP is gone”
Baako says Afoko’s handling of his supension is not strategic.

“There are some people who may be very good businessmen, who may be really politically connected but are immature. They lack the strategic mind to be able to organize a political party of the size NPP,” he said.
Abubakar Saddiq was part of the angry Akufo-Addo loyalists who locked up the Asawase Constituency office, Thursday in protest over comments made by the Chairman of the Constituency, Isaac Brenya.

Brenya had called on the 2016 NPP flagbearer Nana Addo to step down. Isaac Brenya who was in Accra was part of a demonstration against the party’s decision to suspend its National Chairman Paul Afoko.
The deceased and several other supporters had threatened to beat up Mr Brenya for supporting suspended National Chair Paul Afoko and for making comments they thought was derogatory for Nana Addo.

Saddiq was said to have gone to the constituency office on hearing the office had been ransacked Friday morning but was attacked and murdered by unknown assailants.

The New Patriotic Party has condemned the unfortunate incident and called for investigations into it.
Kweku Baako condemned the ransacking of the Asawase office and said rumours that some party supporters were bussed to Accra to protest Afoko’s suspension was an inapriopriate remedy.

He described the murder of Abubakar Saddiq as “ a consequence of the adoption of the street agitation as a prescription to cure” Afoko’s suspension. 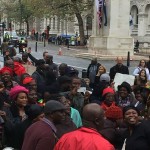