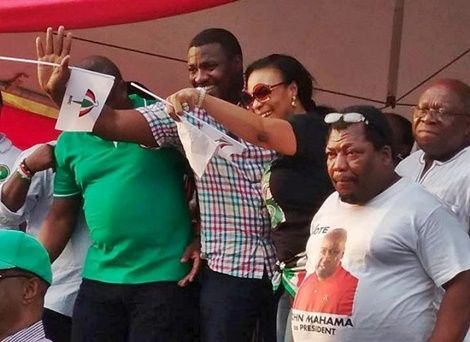 Award-winning Ghanaian movie star John Dumelo was conspicuously visible at the Jubilee Park in the Volta region as supporters of the ruling National Democratic Congress (NDC) gathered to round off a campaign dubbed: “Changing Lives, Transforming Ghana.”

The “Adams Apples” star was spotted on national television sitting with the top guns of the ruling party as sitting president John Dramani Mahama rallies support at the NDC ‘World Bank’ ahead of a nationwide parliamentary and presidential primaries Saturday, November 21.

Unlike his colleague actor and comedian Papa Nii, who was draped in a Mahama T-shirt with a white trouser to match, Dumelo was in a smart informal outfit but with a miniature NDC flag in hand waving at the cheery crowd.

Dumelo, who is a philanthropist, has a soft spot for the ruling NDC. He did a radio commercial for the party ahead of the 2012 elections. In May, this year, he hinted he will be joining the campaign trail of the party.

“Yes I did a TV commercial for the NDC in 2012 because I loved the message they preached. I must state here that it was purely voluntary. I wasn’t paid for that and I wasn’t expected to be paid for that. I did it for the love of the country.

“I also said on starr fm that if in 2016, any party preaches what will benefit the country I won’t mind joining that bandwagon. Be it NPP, CPP or PPP.”

Entertainment pundits have predicted the screen god will one day run on the ticket of the NDC as a parliamentarian and might be using his intermittent appearances at such gatherings to whip up support.