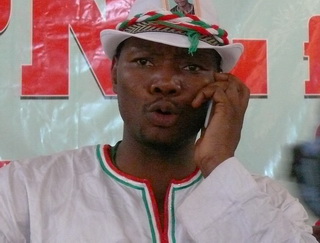 National Chairman of the People’s National Convention (PNC), Bernard Anbataayela Mornah, has condemned the induction of detainees from Guantanamo Bay to resettle in Ghana.

Speaking on Peace FM’s Kokrokoo, Bernard Mornah exclaimed that the decision to accept the detainees into the country is “senseless”.

To him, “whatever gains [being] material or financial” that Ghana may benefit from the United States is unacceptable and so, should not be justified by the government.

“I don’t think that it makes any sense. Whatever the gains [being] material [or] financial that they’re giving to Ghana is [it is] unacceptable…I can’t understand. Somebody should educate me.”

He noted that Americans have put their own tags on people they believe are potential threats to their nation and so condemned them to Guantanamo Bay facility.

He expounded that they write their own profiles about the prisoners and refuse to give them fair justice claiming they are terrorists.

Yet, according to Bernard Mornah, the Americans train the very people they accuse of being terrorists to become what they have turned out to be, but cannot tolerate them in their country.

He strongly expressed disgust over the Government of Ghana’s decision wondering why the it would go to bed with the United States despite the country’s terrorism background.

“Didn’t America train the likes of Charles Taylor?” he questioned, stating emphatically that they “train people to become what they are and you are not a terrorist. You are a trainer of terrorists. So, you have more than outgrown the tag because you’re a master. Look at what they did in Libya. Look at what they did in Iraq and many other countries. The United States definition of terrorism is very disturbing,” Bernard Mornah said.