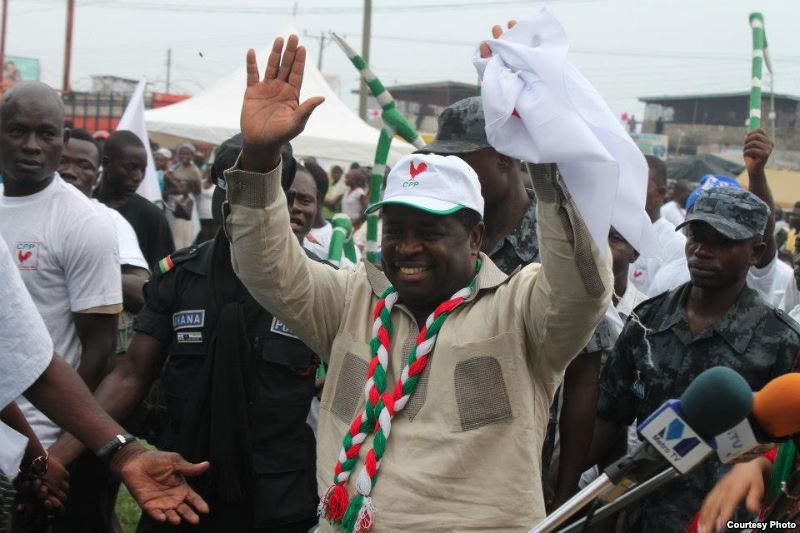 The 2012 presidential candidate of the Convention People’s Party Dr Abu Sakara has announced he will contest the November presidential elections as an independent candidate.

In a statement, Dr Sakara explained that he arrived at the decision following months of “contemplation” and “consultations.”

According to him, he had tried to help build the CPP around the core principles and values of the party that attracted him but the “conduct and misplaced priorities that still dominate decision making in the party,”  has convinced him that his “resources, energy and talent can be put to more productive purpose as an independent Presidential Candidate.”

Dr. Sakara was the running mate to Dr. Paa Kwesi Nduom in the 2008 elections, but was elected as flag-bearer when Dr Nduom left the CPP to found his own party, the Progressive People’s Party (PPP). Dr Sakara during an election campaign for the CPP

The 57 year old agronomist, in his reasons, was hopeful that his “independent candidacy will provide the pivot around which many well-meaning Ghanaians from across the political spectrum can mobilize their heartfelt desire for an alternative to the NPP and NDC.

His decision now leaves the daughter of Ghana’s first President Samia Nkrumah as the sole candidate for the slot, at least for now, after she filed her nomination forms to contest the presidency on the ticket of the CPP on January 2.

Dr Sakara is of the view that his “candidacy will galvanize momentum for real fundamental change in our approach to the many challenges that continue to hold us back from realizing our true potential and vision as a nation and as Africans.”

He said he will soon announce at a press conference, his running mate and further details of his objectives and his national campaign team.

In December 2015, the defeated Presidential hopeful of the People’s National Convention (PNC), Hassan Ayariga, also surprisingly announced his breakaway from the party after the party’s congress.

He claimed he was unfairly treated at the congress which elected Dr Edward Mahama as flagbearer for the 5th time after representing the party since 1996 through to the 2008 elections.