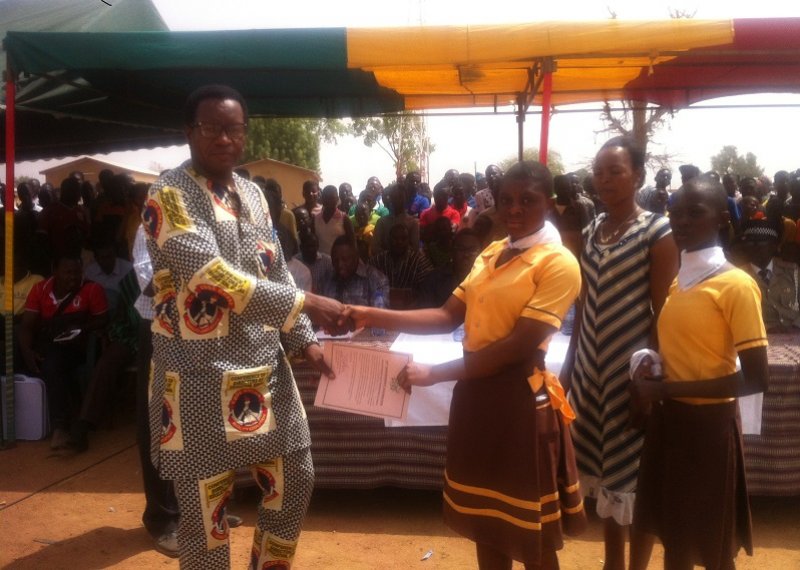 St Anne’s R/C Primary School also emerged the winner in the primary category while the Bongo D/A Junior high topped the Junior high school category for the gallant display of skills during the march past.

They were presented with certificates of participation.

Also present to grace the occasion were some professional bodies including members of GNAT-LAS, the Ghana Red Cross Society as well as the Hairdressers and Beauticians Association of Ghana.

Others were the various school cadet corps, Zoomlion Ghana, and the Christian Mothers Association among other architectural groups.

Addressing the gathering on the theme: “Investing in the Youth for Ghana’s Transformation”, the Bongo DCE, Alexis Ayamdor highlighted the critical role of the youth in national development.

He said for the youth to assume their rightful positions in life, they must be empowered to realize their potentials because any development policy that does not consider the younger population is bound to fail, hence the need to invest heavily in the youth.

Mr. Ayamdor charged the various stakeholders to complement the role of the district assembly by committing resources to develop the capacities for a better generation in future.

The DCE also touched on progress made under the areas of health and education and employment and mentioned the absorption of the Azeem-Namoo Community Secondary School, where it is supported with E Block dormitory and classroom accommodation with science laboratory to improve on its standard.

On development, the DCE later appealed to the landowners in the district to assist in releasing lands for developmental purposes.

The inspection of parade was done by the DCE accompanied by the Bongo District Director of Education, Duncan Nsoh among other officials from the GES.

In a related development, about 15 basic, JHS and SHS schools in the Talensi District joined in the celebration. In attendance were revered Chiefs, Heads of departments, the clergy and personnel from the various security agencies.

The DCE for Talensi, Edward Awunnore, said the youth are the foundation of the society because they come with energy, vibrancy, innovation, optimism and labor.

He noted that by empowering and providing them the opportunities and enabling environment, they can make positive contributions to the socio-economic and political development of the country. He stressed that neglecting them will lead to a frustrated youth who will direct their energies to destructive vices such as armed robbery, drug trafficking and prostitution.

Mr. Awunnore said by investing in the youth, there was the need to support them to become responsible adults.

He reiterated government’s commitment in addressing the unemployment challenges confronting the teaming youth in the country.

He said the youth employment agency under the 59the auspices of the Ministry of Employment and Labour relations is currently in the process of recruiting over 20 thousand young Ghanaians.

He said the move is aimed at reducing unemployment among the youth in the country.