Governor Ayodele Fayose of Ekiti State, has described his wife, Feyisetan, as a great source of support and God’s grace he enjoys as a politician and the leader of the current administration in the state. In a congratulatory message by the governor on Thursday to mark his wife’s 52nd birthday, Fayose described his wife as the positive force behind his political successes.

According to a press statement issued by his Chief Press Secretary, Mr. Idowu Adelusi, Fayose said of his wife, “She has distinguished herself as a role model. A person who believes in modesty and totally reserved.

“Her‎ prayer life has made a difference and has impacted positively on me. Any woman that marries a man like me, who is generally seen to be fearless and courageous and who is vulnerable to attacks by political opponents, cannot afford not to have a woman with her sterling qualities as wife. Only a virtuous, Godly and resolute woman like her have what it takes to stand firm in the face of attacks.

“I appreciate her as she adds another year and also appreciate her care for our children. God has brought her to this kingdom at this auspicious time when many supposed men of honour have disappeared into the thin air.

Fayose and his wife, Feyisetan during his inauguration as Governor of Ekiti State in 2014.

“I want to assure her that her labour of love will not be in vain. She is a woman to emulate for her modesty and inspiring and fervent prayer life and only her can be an ideal wife for a man like me,” he said.

Governor Fayose wished her many more glorious and fulfilling years on earth and prayed for more bliss in their marriage. 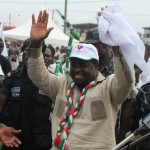 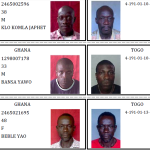