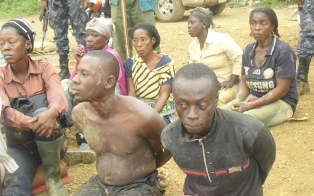 The Eastern Regional police have arrested 37 suspected illegal miners (galamsey operators) – including a deaf and dump person identified as Mickey, 20 – during separate swoops at Akyem Dompeh and Osenase near Akwatia on Wednesday.

They were arraigned before Koforidua Magistrate Court ‘B’ on Wednesday and have been remanded into custody to reappear on 14th January, 2016. They were charged with seven counts of conspiracy to commit crime, trespassing, mining without permit, riot with weapons, assault on public officer and causing unlawful damage.

DAILY GUIDE learnt that the illegal miners, numbering over 78, on Tuesday clashed with military and police officers when they stormed the Akyem Dompeh mining site to cause their arrest.

A police source told DAILY GUIDE that when the security agents got to the site, the illegal miners took to their heels, but the law enforcers managed to grab 26 of them on the spot, while the other 11 were arrested at Akyem Osenase in a different operation on the same day.

According to the source, two out of 26 suspects, Dr Michael Bugriu, 62 and Samuel Nketia, 43 went to the village to mobilise over 700 youth in the Dompeh community who came to the outskirt of the village to block the road with logs, concrete blocks, electricity polls and nailed wood to stop the police from conveying the suspects to the police station. But the police fired tear gas to disperse the angry youth who were chanting war songs and demanding the release of their colleagues.

The angry youth also hurled stones at the security personnel which injured one military officer and also smashed the windscreen of a hired vehicle being used by the military.

The police further called for reinforcement from Kyebi and Anyinam who stormed there to help the other officers to convey the 26 suspects with one excavator, including the driver, Abdul Majeed, 29. They also seized some quantities of gold in a container to tender as evidence at the court.