At least one person has been confirmed dead and 30 others have been trapped in a mining pit at Tarkwa Nsuaem in the Western region.

The Municipal Police commander Paul Ayittey has also confirmed two others were injured in the early Monday morning disaster.

The police have cordoned off the area and launched a search and rescue mission.

Illegal mining activities are rampant activities in several areas within the Western and Central regions.

The Central region has an unenviable record of the single highest galamsey-related tragedy. The biggest mining tragedy is believed to have occurred Sunday morning at Dunkwa-on-Offin in 2010.

More than a 100 people died after a pit collapsed.

Three years later, 16 persons are believed to have also died after a mine pit caved in at Kyekyewere near Dunkwa-on-Offin, in the Central Region.

Information on the tragedies is often understated by illegal miners making it difficult to confirm details of the disasters.

Joy News Kwaku Owusu Peprah reports that residents in mining communities in the region consider mining deaths as a sign that the fortunes of the business will soon improve.

He says people believe that gold is a spiritual resource and that more will be unearthed when blood is spilled. 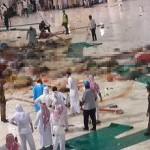