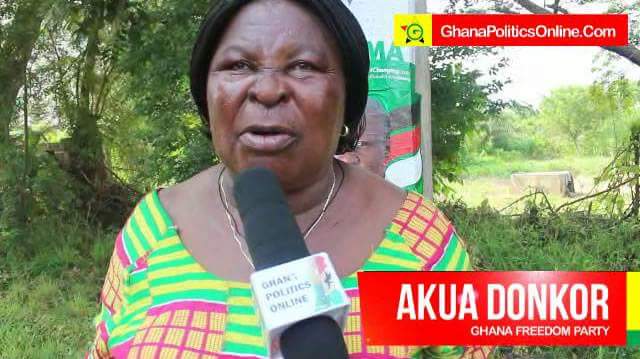 Three men who robbed the founder of the Ghana Freedom Party (GFP) have been sentenced to 60 years inprisonment.
Each of the them will serve 20 years behind bars after an Accra High Court found them guilty of stealing Akua Donkor’s $30,000 while she was on her way to the airport.

The suspects Yakubu Yusif, the Central Regional Chairman of the GFP, Barnabas Kayese, Madam Donkor’s personal driver and Abdul Razak Shaibu, were found guilty of robbery and conspiracy to commit robbery.
In his judgement, the presiding judge Mr Aboagye Tandoh said the account of the convicts were full of half-truths and contradictions.

Case facts
On December 20, 2016, Madam Donkor, in the company of Yusif and Kayase (who was driving), was in the car from Taifa to the Kotoka International Airport to catch a flight to the United States, the prosecution explained.
Prosecutor Chief Inspector Duuti Tuaruka added she decided to make a stopover at her house before heading for the airport.
“On reaching Sowutuom, Shaibu, Joe and Nuamah, armed with guns, appeared on a motorbike behind the vehicle. As soon as Kayase spotted the armed men, he reduced the speed of the car and switched on double hazard to signal that Madam Donkor was in the car,’’ Inspector Tuaruka said.
READ MORE: Akua Donkor is ready to take care of your baby if you can’t afford to
Inspector Tuaruka added that immediately Kayase  parked the car and Shaibu, Joe and Nuamah attacked Madam Donkor.
“The robbers dragged Madam Donkor from the vehicle and snatched her travelling bag containing $30,000, a plane ticket, a Ghanaian passport, a voter’s ID card and GH¢2,000 and escaped,’’ the prosecution added.