The Electoral Commission of Ghana has disqualified twenty-four parliamentary aspirants from contesting in the upcoming parliamentary elections in the Ashanti region.

This comes after the Commission on Monday disqualified 13 presidential aspirants from the December polls.

Reports by Daily Graphic indicate that 240 aspirants who filled their nomination at the close of filling last Friday, only 219 were cleared to represent their respective political parties as parliamentary candidates in the elections.

The 24 aspirants were disqualified on different grounds of inappropriate completion of their forms.

The Electoral Commission Chairperson, Charlotte Osei, who made the announcement at a news conference, said those disqualified failed to meet the necessary requirements that makes them eligible to contest.

There were different reasons for which each of the parties were disqualified.

Some of the political parties whose candidates were disqualified from the Presidential race have initiated legal actions against the Commission to get it to reverse its decision and instate them in the race. 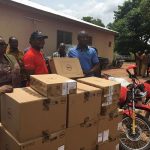