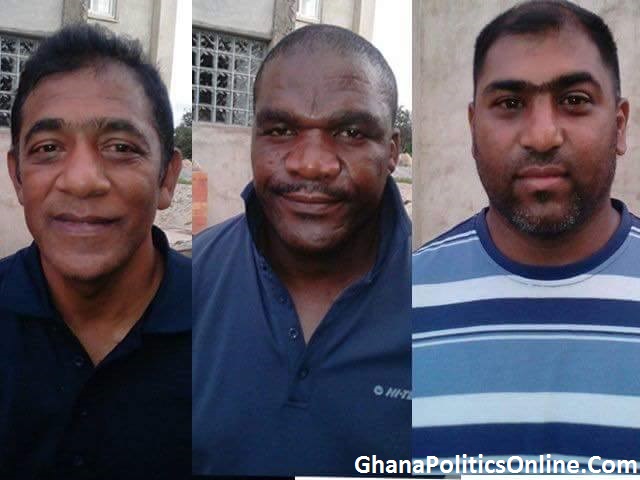 The New Patriotic Party (NPP) has confirmed the 15 people being trained by three South African ex-police men are part of its security detail, but denied links to any treasonable motive.

Ghana’s Bureau of National Investigations (BNI) arrested the three South Africans on Sunday at the El Capitano Hotel in Agona Dunkwa, suspecting they are training people to compromise the security of the country.

They are 54-year-old Major Ahmed Shaik Hazis (Rtd.), 39-year–old WO/ Denver Dwayhe Naidu (Rtd.) and 45-year-old Captain Mlungiseleli Jokani (Rtd.). They were allegedly training the 15 young men in various security drill and rapid response maneuvers, weapon handling, VIP protection techniques and were allegedly brought into Ghana by one Capt Koda, who is the head of security of opposition leader Nana Akufo-Addo.

The deputy director of communications of the NPP, Perry Okudzeto, told Accra-based Joy FM the South African nationals, who were training the security men strictly for “crowd control”, had license to operate. “We are not training them for military tactics,” he emphasised.

“There is nothing untoward,” Okudzeto stressed, adding the BNI and the state-owned Daily Graphic had put “a spin on it”.

According to him, the suspects are being “accused wrongly to malign” the NPP. However, he said the counsel of the trio are working frantically to gain access to their clients “to know what the real issues are.”

BNI documents available to the media say the ex-servicemen were conducting the security drills under the guise of training personnel for Delta Force Security, owned by Capt Kwesi Acquah (Rtd) who also mans the hotel.