Chairperson of the Electoral Commission(EC) Charlotte Osei has explained that the 2016 election was not the first time the media had been asked to pay for accreditation.

Appearing before Parliament today(Wednesday) Mrs. Osei stated that, the amount of 10 cedis per media person for the coverage of the elections was necessary to meet the cost of producing the cards, and in her opinion the amount was within reach of Ghanaian media houses.

According to the EC boss, a special identification card or accreditation was required grant the media access to the Commission, polling and collation centers.

“We needed to get the media accreditation to allow them access to the Commission and that would come with an extra cost which the EC was not in the position to afford and so we called on the media houses to pay for that purpose,” she stated.

In the heat of the election, she said, authenticating staff ID’s from media houses would have been problematic, hence the need for a distinct accreditation from the commission.

Madam Charlotte Osei believes the card also protected the over 40000 media personnel accredited for coverage as security personnel and election officials could easily identify them.

She was however not sure that the process would continue in subsequent elections because such a decision has to be made with her fellow commissioners.

The EC Chairperson appeared before Parliament to explain how the money collected for media accreditation was expended and how much was realized from the replacement of voter identification cards. 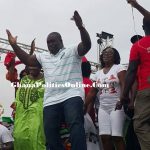