Police at Mampong in the Ashanti Region have arrested three suspects in a robbery incident which left two dead and eight others injured.

The suspects who are yet to be identified are believed to be members of a gang which attacked a commercial vehicle on the Kofiase-Krobo Road last Thursday.

The robbers shot and killed one person and wounded two others.

Another vehicle which ignored an order to stop ran over six of the passengers the robbers had ordered to lie on the road, killing another passenger.

The deceased persons have been identified as Evans Anane, 13, and Beatrice Opoku.

Correspondent Nana Boateng reported Chief Inspector John Amponsah as saying they rushed to the place immediately they heard of the attack.

They were met with gunshots by the robbers, and they returned fire.

As a result, one police officer, Inspector Francis Ahadzie also sustained gunshot wounds and is on admission at the Komfo Anokye Teaching Hospital.

The eight other victims who received gunshot wounds are also receiving treatment at the Mampong Government Hospital. 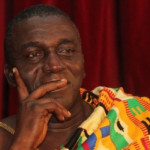