In a statement issued in Osogbo, on Sunday, by the chairman, Chief Ademola Ishola, the party insisted that Falae never received any money from the ex-NSA.

He stated that President Muhammadu Buhari and his party, the All Progressives Congress (APC) was out to destroy Falae because the former presidential candidate and his party did not support them during the last election.

“As a party, we have no presidential candidate and our party endorsed the PDP’s candidate. And we agreed on principle and the PDP and not Dasuki released the sum of N100 million for mobilization of all our teaming members across the country to support Jonathan and the PDP.

“This is a rubbish talk that Falae took N100million from Dasuki. The said money was declared by Chief Falae to the party and over N5million of it was received by and party, the SDP in Osun state.

“President Buhari and the APC were only engaged in a smearing campaign against our leader because they don’t want any opposition to speak against all their anti-peoples’ policies,” Ishola stated. 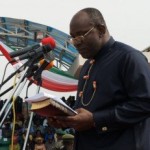