Deep throat information reaching us has it that Dr Bawumia the running mate to Nana Akufo-Addo will soon be dragged before a special team of the flag bearer for branding desks donated to Kperisi MA Primary School in his name.

According to our source, the flag bearer became furious upon receiving pictures of the desks containing the name of the running mate.

The angry flag bearer retorted “Bawumia knows he is not the one contesting this elections. He knows I am the one whose name will appear on the ballot paper. What could have motivated this show of popularity? I don’t get it”, the source disclosed.

It would be recalled that, Dr Bawumia, upon a visit to Kperisi MA primary School in the Upper West Region, revealed school pupil lying on the floor while receiving lessons from teachers. It would also be recalled that, the running mate to the flag bearer of the New Patriotic Party (NPP) made a promise to provide desks to the school. A couple of days after his visit, it was carried in the news of his honouring his promise. To the surprise of many, the desks were embossed with the name of the running mate Dr Bawumia.

The actions of Dr Bawumia had raised further suspicions in the minds of many in the NPP on agenda 2020 which is believed to be an ambition he harbours to take over from the flag bearer.

According to our source, the party’s Disciplinary Committee would not be used for this exercise as it would raise public attention on matter.

Our source disclosed the composition of a five-member team with the flag bearer as the leader of the team. Others included in this committee are Nana Akomea the National Communications Officer of the NPP, Peter Mac Manu the campaign manager of Mr Akufo-Addo, Mr Freddie Blay National Chairman of the NPP and Mr Gabby Asare Otchere-Darko.

Meanwhile, a source close to the running mate Dr Bawunia reveals that, he remains unperturbed upon the receipt of notice of invite to the five-member committee.

“Well, it is normal. We needed to be visible and so, I had to do what I did. After all, the desks were ordered at my instance and not the party or the flag bearer”, the source added.

We shall keep you updated in our subsequent publications. 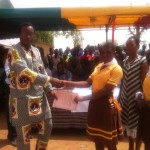