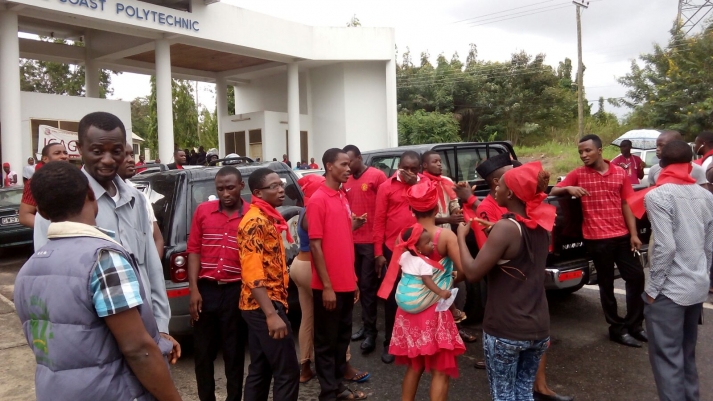 Some students of Cape Coast Polytechnic today demonstrated against the Authorities of their School for their failure to make sure C-Poly makes it onto the first list of Polytechnics to be converted into Technical Universities.

The irate students and some towns folks blocked the school’s Council Chairman from entering the premises, the entrance to the home of the Rector was also barricaded, making it impossible for him to leave home for a scheduled council meeting at the school.

The angry students are accusing the authorities of the school of not doing enough to get the school covered in the first batch of polytechnics being considered by Government. Police Officers were dispatched to the campus to restore order as the rampaging students and some youths of the Metropolis were preventing vehicles from entering the premises.

The conversion of Polytechnics into Technical Universities, which was one of the manifesto promises of the Mahama administration ahead of the 2012 elections, is intended to bridge the gap between Academia and Industry. It is also directed at bringing up students with employable skills for economic transformation and so far, six (6) Polytechnics have been selected to benefit from the exercise after appraisal.

When contacted the Ruling party’s Central Regional Communication Officer-Mr Kwesi Dawood who was on campus to monitor the situation called for calm and explained the selection processes whiles reminding the protesters that the fact that C-Poly was not captured in the first phase does not mean, it will not be converted and read a report from the National Council Tertiary Education on the subject to them and impressed on them to use dialogue instead of demonstrations.

The attention of the National Council for Tertiary Education (NCTE) has been drawn to misleading statements by some sections of the general public in respect of the process for conversion of polytechnics to Technical Universities.

Considering that the NCTE has supervised the entire process so far as is constitutionally expected of us, we wish to put the records straight for the information of the general public as follows.

1. Following the vision of President John Mahama as communicated in the 2013 State of the Nation Address to convert Polytechnics to Technical Universities to train high level technical skills in the Technical and Vocational Education and Training (TVET) areas for the country’s economic and national development agenda,, the Ministry of Education in September 2013 set up an eight member Technical Committee to among other things develop a road map for implementing the policy.
http://ghanapoliticsonline.com
Membership of the Committee were: Dr. George Afeti (Chairman), Cdr (Rtd.) J,A,Combey of the Association of Ghana Industries, Dr J.V.K Afun and Prof. G.S.K. Aflakpui, Reps of Conference of Rectors of Polytechnics, Mr. Kwame Dattey (Executive Secretary, National Accreditation Board), Dr Albert Sunnu (senior Lecturer, KNUST), Mrs. Divina Nkwantabisa (State Attorney, Attorney General’s Dept), Prof. Mahama Duwiejua (Executive Secretary, NCTE) and Mr. Evans T. Anomah-Asare of NCTE serving as Secretary to the Committee.

2. The Committee’s report which was completed in December 2014 and submitted to the Minister recommended among other things the characteristics of a Technical University and eligibility criteria for assessment of and converting a polytechnic to a technical university. A draft Technical Universities Bill was also developed by the Committee 3. The Technical Committee’s report and the draft Bill were referred by the Minister of Education to the NCTE for comments. Council endorsed and recommended the report and its implementation strategy to the Minster 4. Following this, a stakeholder’s consultative forum was held at the LA Palm Beach Resort on January 6, 2015. Participants included Rectors, Vice Chancellors, and Principals of Colleges of Education, Representatives of the National Union of Ghana Students, Ghana National Union of Polytechnic Students, Teacher and Worker Unions of the Polytechnics, the Association of Ghana Industries, Conference of Private Universities, and other major stakeholders. The forum discussed the Technical Committee Report and the draft Bill. It was unanimously agreed at this forum that the conversion should not be done wholesale, instead it should be done in phases based on an assessment of each polytechnic.

5. The NCTE in July 2015, constituted four Teams of Expert Panels whose terms of reference were among other things to conduct a preparedness assessment of the 10 Polytechnics to determine their current status in relation to the conversion, recommend where possible the Polytechnics which meet the criteria for conversion. 6. The Expert Panel was made up of the following: Prof Anthony Apeke Adimado , Dr Joseph Ofei Darko Ing, Francis Laako Larkai Mr. William Gariba Akanwariwiak Prof. F.K Rodrigues Mr Lawson Anakwa Mr Sampson Damtey Tetey Mr Isaac Boamah Mr Richard Ajei Dr. Joseph Dr J. B. Hayfron-Acquah Dr. Geophrey Anornu Mr. Dadzie Mensah Officers from NCTE and NAB served as Secretaries to the Panels. 7. The Panels visited and assessed each Polytechnic based on the agreed eligibility criteria. The Panel further expanded the criteria to a sixteen (16) point check list to make the assessment more scientific.

8. The Technical Committee of the NCTE analysed the Expert Panel report and subsequently submitted recommendations to the Minister for consideration. 9. It is worth stating that in order to provide insight into how the Expert Committee conducted its assessment, it was agreed that their report be presented at a debriefing session on September 7, 2015.

The session was attended by Rectors, representatives of unions of the polytechnics, the NCTE, NAB, the Ministry and other stakeholders. The Lead Panel Team Leader Prof A.A. Adimado who did the presentation made it clear that the Expert Panel’s report was only advisory and was subject to review by the NCTE which set it up. 10. The Ministry of Education also convened another consultative meeting on January 12, 2016 involving representatives of NCTE, National Accreditation Board (NAB), Ministry of Education (MOE) and the Lead Chairman of the Expert Panel. The meeting was to consider the NCTE and the Expert Panel reports and take a final decision on polytechnics which should be listed in the Schedule of the Draft Bill as those to be converted to Technical Universities under Phase 1. The meeting unanimously agreed on a list of polytechnics to be listed in the Bill based on expert advice. The report of this consultative committee is in the process of being published by the NCTE in the true spirit of transparency and objectivity which has underpinned this entire process. 11. The Technical Universities Bill will soon be considered by Parliament for subsequent passage into a Technical Universities Act. 12. We wish to make it clear that the fact that a polytechnic has not been listed in the Schedule of the Bill when passed does not suggest that the door is closed to them and they would have no opportunity to be considered for conversion. 13. All the reports mentioned above made it clear that Polytechnics that do not meet the conversion criteria under Phase 1 of the conversion would be assisted to upgrade to meet the eligibility criteria. When this has been achieved, there is an avenue for these Polytechnics to apply to the NCTE at any time it feels ready to be assessed and the NCTE will send an expert panel to undertake the assessment and a recommendation made to the Minister who can cause the Schedule to the Technical Universities Act, as passed, by Parliament amended by a Legislative Instrument to include that polytechnic as a Technical University.

14. The NCTE wishes to stake emphatically that the whole conversion process so far has been done in a fair and transparent manner, as such; there was no room for an individual or group of individuals either based on political or regional considerations to influence this very important national agenda and vision of His Excellency President John Dramani Mahama. 15. We wish to advise that people desist from utterances, actions and threats intended to jeopardize or derail the progress so far made towards the agenda to convert our Polytechnics to Technical Universities. The conversion policy ultimately is for all polytechnics and there is therefore no need for division and rancor over a process which is intended to benefit the entire polytechnic community. Instead all well-meaning Ghanaians should lend their support towards this noble effort which we all agree is in the national interest. Issued by Management of the National Council for Tertiary Education Dated February 18, 2016
O 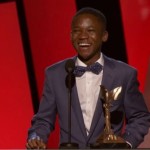