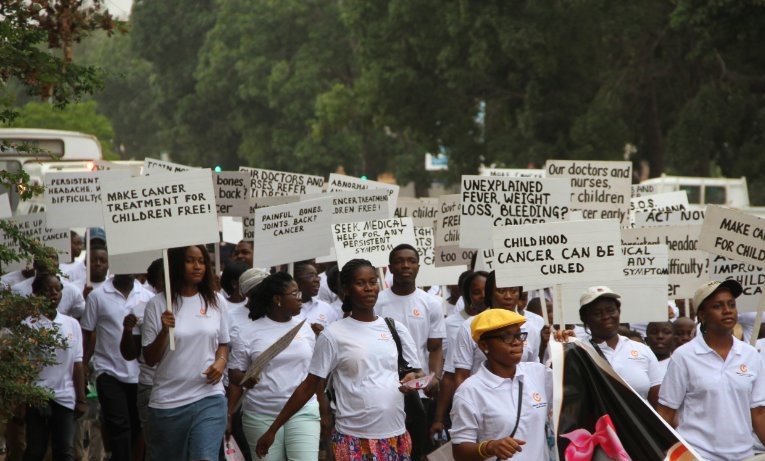 A section of parents of children with cancer have appealed to the government to subsidize drugs used in the treatment of childhood cancers.

According to them, the drugs are too expensive and this puts a lot of financial burden on them since most of them are unemployed.

childhood cancerThey expressed their sentiments with News Ghana in an interview.

“My life has not been the same,” said one of the mothers who’s child has been diagnosed with cancer.

According to her, aside having to stay at the Korle-Bu Teaching Hospital for months for her daughter to undergo treatment during the initial stages of the cancer, she is also facing a lot of financial difficulties because the drugs are expensive and she is unemployed.

“The government will have to help us because the drugs and the fees for laboratory tests are just too much,” she appealed as tears welled up in her eyes.

Another section of parents i spoke to, said on the average, they spends about GH¢200 when their wards goes for treatment, which they do every three weeks or less, depending on the advice the doctor gives.

Another source of worry for them is the fact that, their children who have to stop school for treatment, wishes to return to school but due to financial difficulties, they are unable to fulfil that.

Another parent whose boy was diagnosed with cancer of the blood (Leukaemia), also said that the drugs for treating cancer is expensive and also appealed to the authorities to look into this problem to reduce the financial burden on parents.

She said the cost of treatment varies from GH¢50 to GH¢200 and these amounts, she said has to be paid sometimes weekly, fortnightly or twice a week.

According to her, she was a secretary but had to resign because her boss did not understand why she had to be off work for long periods of time to take care of her ailing son.

“It was difficult when I had to combine work with caring for my son so I had to resign because my child’s health was important to me” she said.

According to my findings at the Korle Bu Teaching Hospital, Dr Lorna Awo Renner who is a Pediatrician, had said, although some adult cancers such as cervical and breast cancers were on the National Health Insurance Scheme (NHIS),

But you can agree with me taday that, none of the childhood cancer treatment or medications are on the scheme.

According to her, the commonest cancers such as lymphoma will cost GH¢600 for full treatment, while those which require surgery may coGovernment Urged To Subsidize Childhood Cancer Drugs

A section of parents of children with cancer have appealed to the government to subsidize drugs used in the treatment of childhood cancers.st higher as about GH¢1500.
However, the Cancer Unit sees patients from all over the country and some parents cannot bear such fees to care for their children.

She said occasionally, individuals also take up the treatment cost of a child and other organisations also support the unit from time to time.

Speaking to the country coordinator for the world childhood cancer (WCC) Mr. George Achempim, he said the Ghana Parents Association for Childhood Cancer comprises parents who have children cured of cancer and those who have lost loved ones to cancer.
Today, with the initative of WCC, they have introduced beadmaking and other skill training for parents at the mothers hostel at Korle Bu Teaching Hospital, to support families battling with cancer.

Mr. Achempim said, in between chemotherapy, parents usually spent their time watching TV or sleep, and this moments of boredom is always associated with stress.
Therefore, beadmaking training does not only serve as a diversionary therapy, but also as additional livelihood option that can fetch them some money to support their children’s treatment.

The beads according to Mr. Achempim, will soon hit the markets and even if possible, linked to the UK market for extra inflow of resources to support medication and upkeep of the children and the care takers.

He concluded by saying, there is lack of awareness of childhood cancer in this country, especially in the rural areas. But it is important for parents to seek early treatment and added that, when cases are reported at a very late stage, only few treatment options are available.