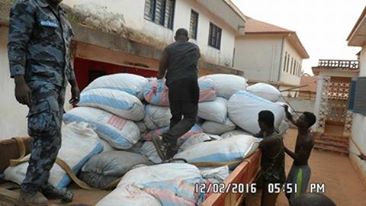 Seventeen persons have been arrested in a dawn swoop at Apesika, a suburb of Ankama Electoral Area of the Kwahu East District in the Eastern region.

The Nkawkaw Divisional Police Command also seized 204 bags of leaves suspected to be Indian hemp in the operation. Eleven out of the 17 suspects including five females and six males are expected to appear before court today, Monday February 15, 2016 after screening.

The Nkawkaw Divisional Police Commander, Chief Superintendent James Sarfo Peprah told Starr News the police gathered intelligence about the activities of farmers in the area, hence embarked on a dawn operation to arrest the situation.

“This is our first time of embarking on such operational exercise in that area but once we have that much I can confidently say this is the work they do, the village comprises 21 houses and we almost retrieved the suspected substances from every house.”

He said the suspects tried bribing the police after they were busted but the officers refused their offer. According to him, two trips of Kia Truck was used to convey the substances to the police station.

The police chief said the substance will be sent to the Police Laboratory for a forensic test to aid prosecution.

Chief Supt Peprah stated the exercise is part of security measures being undertaken by the Division to reduce criminal activities ahead of the Easter celebrations in the area.