16-member Council for the University of Ghana has been inaugurated to govern the affairs of the school.

The Council, which will be chaired by Prof. Yaw Twumasi was inaugurated today at the University of Ghana by the Minister of Education, Dr. Matthew Opoku Prempeh.

A letter signed by the Office of the President and signed by the Chief of Staff, Frema Opare named the members of the Council including 5 presidential nominees.

The Council is made up of 11 representatives of the various stakeholders including the Students’ Representative Council (SRC), University Teachers Association of Ghana (UTAG), Tertiary Education Workers’ Union (TEWU).

The inauguration follows series of complaints by various education stakeholders over the non-existence of a Governing Council for the various public Universities in the country after the expiration of the term of the previous Council.

A private citizen, Supi Kofi Kwayera, recently sued the University of Education, Winneba (UEW), and the Education Ministry for what he said was the unlawful extension of the Governing Council’s tenure.

The move came after the Member of Parliament for Effutu, Afenyo Markin, called for the immediate withdrawal of the thousands of certificates issued by the University of Education, Winneba, since 2013, because they were authorized by a Council whose tenure of office had expired.

The management of some of the Universities had earlier told Citi News the non-existence of a functioning Governing Council was hampering the smooth running of the schools.

Dr. Matthew Opoku Prempeh in his address urged the new council to help the University of Ghana promote practical training and also ensure that graduates acquire the skills and human resource demands of industry.

See the list of the Council Members below: President’s nominees

A Vice-Chancellor of an African University Dr. Max Price 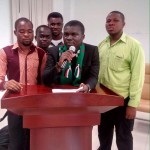