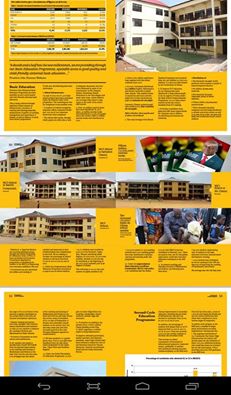 It is said that education is the key and rightly so, gains made in the educational sector under the leadership of president Mahama opened the door to his accounting to Ghanaians.

Let’s now focus on the basic education level which is what we are going to discuss now. During the 2008/2009, enrollment to kindergarten nationwide stood at 16,439. At the end of the 2014/2015 academic year, enrollment at the kindergarten level was 20,960. Thus a difference of 4,521 representing a 27.5% increase. Enrollment at the primary level was 17,881 during the 2008/2009 academic year but jumped to 21,309 in the 2014/2015 academic year. A difference of 3,428 representing a 19.2% increase. The enrollment at JHS level stood at 10,213 as at the end of the 2008/2009 academic year and moved up to 13,840 at the end of the 2014/2015 academic year. Thus a difference of 3,627 representing a 35.5% increase in enrollment. This impressive increase in enrollment at the basic education level was made possible due to government ensuring it lived by it’s promise to ensure education becomes accessible to Ghanaians and implementing policies to ensure that promise becomes a reality. From the figures above, it is evident that Ghanaians have better access to education today and more Ghanaians are going to school today. The president is really contributing to making the future of Ghana bright.

Let’s take a look at some policies by government that has ensured we see this massive increase in enrollment at the basic education level. A total of 1,614 out of 2,578 school projects have been completed under the schools under trees elimination program so far with the rest expected to be completed in the medium term. The school shift system which came about due to inadequate classrooms have now been eliminated in most communities like Wa, Sunyani, Tarkwa, Dansoman, Krachi Nchumuru, etc. Teachers bangalows, education offices and sanitation blocks have also been built nationwide. Over 100 million exercise books have been distributed to students. In 2013 alone, 32 million exercise books were distributed to 4,768,806 pupils across the country. Close to 2 million pupils have been provided with school uniforms since 2010. Government has currently exceeded the universal textbook-pupil ratio of 3 textbooks for 1 pupil as we stand at 4 textbooks for 1 pupil.

Please drop your email address if you need a soft copy of the Accounting to the people book so I forward it to u.

This is just the tip of the iceberg.