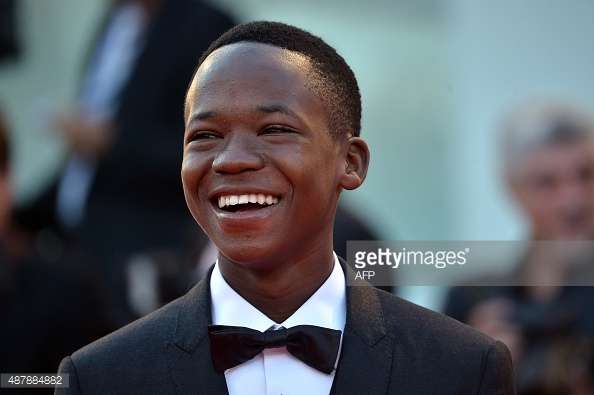 Young Ghanaian rising actor, Abraham Attah, has received yet another award, this time the rising star award, from the Black Film Critics Circle for his role in the movie, “Beasts of No Nation”.

Beasts of No Nation received a special mention, with the young lead getting the BFCC’s rising star award.

“The US critics’ association said the Ghanaian’s debut as an African child soldier was “one of the strongest and most phenomenal we have ever seen” and said he had “a very bright future ahead of him”.

Abraham Attah, 14, a street vendor, shot to fame after he won the Marcello Mastroianni’s Best Young Actor Award at the 2015 Venice Film Festival, for his performance in the movie alongside Idris Elba.

Attah Abraham, who is said to be without any acting background, was picked from the streets of Ghana during the shooting of Netflix’s movie “Beasts of No Nation.”

Beasts of No Nation is about a child soldier trapped in a civil war in an unnamed African country.

Abraham recently landed another international movie role, and will be a part of the adventure drama “The Modern Ocean” alongside A-List Hollywood actors including Anne Hathaway, Keanu Reeves and Daniel Radcliffe.

The Black Film Critics Circle also voted “Creed” as the best film of 2015. In Creed, Rocky Balboa (left) becomes trainer and mentor to the son of his late rival.

The Rocky spin-off was also given prizes for lead actor Michael B Jordan and for supporting players Sylvester Stallone and Tessa Thompson.

Cube, the BFCC said, “continues to defy expectations [and] expand the boundaries of what black film-makers can achieve”.

The post Abraham Attah wins 2nd award for role in Beasts of No Nation appeared first on citifmonline.com