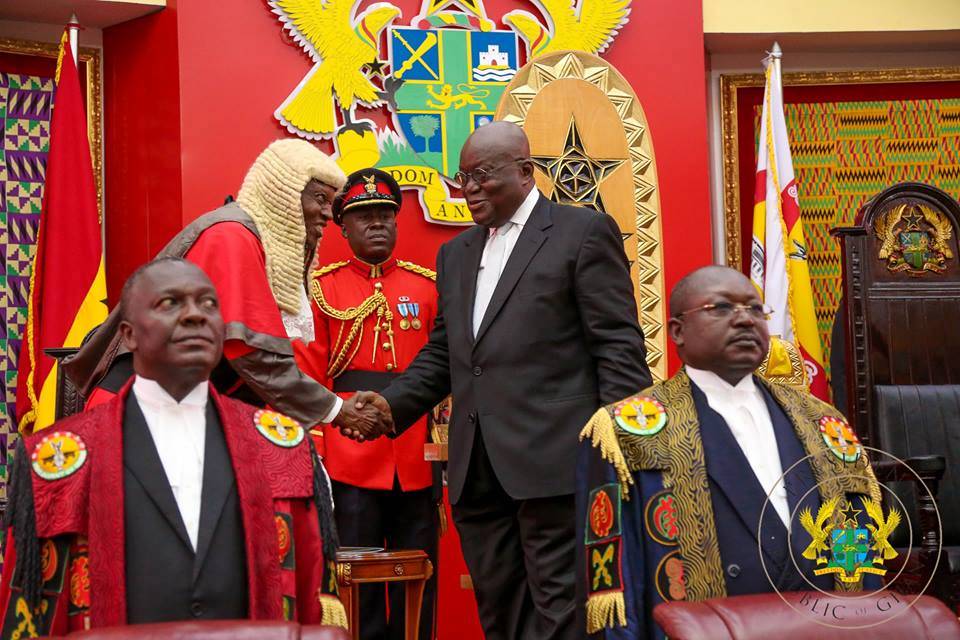 The Minister of Information, Mustapha Hamid, has said that President Nana Addo has appointed some 110 Ministers including deputies to serve in his government because the economy the NPP inherited is weak and “requires a competent army” of people to help revive it.

At a press conference held at the Information Ministry in Accra were he gave 110 complicated reasons , Hamid said President Akufo-Addo took into consideration the competence of all his appointed officials.

“In putting together this government, he [President] has been guided by the competencies and experiences of the people and the legal requirements for making such appointments.”

“Akufo Addo government has inherited a country whose economy is if you want at its weakest …requires a strong army that will resolve, confront these challenges and resolve them in the rapid manner that we[Ghanaians] require in order to put our country back on the path of progress and development” “If we keep doing business as usual, we cannot transform the country in the manner that we envisage. This number of Ministers that the President has presented to Parliament brings his entire government to 110 Ministers of State and deputies who would assist him deliver on the ambitious programme of national transformation and development which the people of Ghana have charged him to implement,” he added.
He also explained that President Nana Addo was guided by Article 78 (2) of the constitution in making his appointments.
President Nana Akufo-Addo has currently appointed a total number of 110 people to serve as ministers, ministers of state and deputies in his administration.

Out of the total 110, 20 are Regional Ministers and their Deputies, 40 ministers for various ministries, with 50 deputies.
By this number, the Nana Addo-led administration would have the highest list of ministers and deputies to serve in any government since the start of the fourth Republic.

The Director of Communications of the New Patriotic Party (NPP) has defended President Nana Akufo-Addo on his appointment of 110 ministers.

The move has been widely condemned by a section of the public, who say that many of the appointments are unnecessary and amount a waste of public funds.

But in a reaction on Facebook, Nana Akomea said that vision put forward by Akufo-Addo to turn the fortunes of the country around is so huge that all the 110 ministers are required to bring it to fruition.

“The vision of one factory per district, comprehensive free SHS, comprehensive irrigation in the north, one million extra dollars per constituency, special prosecutor, etc, offers the country the real chance to industrialize, provide jobs to the teeming youth on a sustainable basis, move agriculture from peasant levels to real agric business, stabilise the cedi on a sustainable basis, aggressively meet the basic developmental needs of our deprived communities, tame inflation, tame corruption, and generally move this country onto the cherished new paradigm of progress and development.

“President Akufo-Addo believes he needs these numbers of appointees to deliver,” he wrote
Akomea acknowledged that the size of Akufo-Addo’s government was unusually huge.

He described it as the largest in the fourth republic, adding that the numbers of ministers in all the previous administrations had never crossed 90.

He said even with that, there was always a clamour that the numbers were too large for a small poor country like Ghana.

Akomea said Ghanaians, including political parties in opposition, always called for trimming of ministerial numbers as part of general belt tightening in the country and a show of leadership by example at the highest levels of government.

However, he said, if Akufo-Addo succeeded in his effort to make Ghana a better place, the size of his government would no longer be an issue.

“For now, these numbers are an issue, and the concerns being raised about them are legitimate, as
expected, and in order, just as the NPP in opposition raised them.
If he indeed begins to deliver concretely on his transformational agenda, then the numbers will cease to be an issue,” he said.